Do you have a ceiling fan in your kitchen? Without one, slaving over a hot stove gets a lot…well, hotter. Even if you have a small kitchen, a ceiling fan creates vital airflow that can make your kitchen feel several degrees cooler and can even help clear out smoke in the case of kitchen mishaps. But if it’s been a while since you’ve shopped for ceiling fans, you might be feeling overwhelmed by the vast array of styles and designs available. Plus there are features, cubic feet per minute (CFM) ratings, sizes, number of blades, and more. Here’s what you need to look for in a ceiling kitchen fan.

Visual design will be the first thing you’ll notice about any ceiling fan, and it’s one of the reasons why choosing a fan can be daunting for many homeowners — there are so many different designs and styles of ceiling fan available today that it can be hard to pick one!

Choose a fan that reflects the colors and textures found in your kitchen. An all-wood look would suit a rustic farmhouse or country kitchen, or any traditional decor that emphasizes wood finishes, and with styles ranging from the sleek and modern to the tropical and traditional, there’s something for every aesthetic. Break up the monotony of a unified aesthetic with a fan in a contrasting style, or spruce up an eclectic look with a fan that will serve as both fixture and focal point. In a kitchen, you want a powerful ceiling fan that can really get the air moving to cool you off while you’re baking those bake-sale cupcakes or preserving those jars of berries you and the kids picked together as a family. Fans with long, steeply angled blades circulate more air than fans with short, fat blades, and you’ll usually get better air circulation with five or fewer blades. Energy Star-rated ceiling fans cost 20 to 60 percent less to operate, depending on whether they have a light fixture incorporated (Energy Star-rated fans with lights are cheaper to operate than their non-Energy Star-rated counterparts). Look for a cubic feet per minute (CFM) of at least 5,000, but you may want something rated at more than 6,000 for kitchen use.

Your fan also won’t function well if it’s the wrong size for the space, so measure your kitchen and get an appropriately sized fan:

Measure the ceiling space in your kitchen and make sure your fan blades will have the clearance to turn without hitting cabinets, hanging racks, or other fixtures in your kitchen.

When it comes to bedroom ceiling fans, most homeowners look for quiet motors, but that may or may not be at the top of your wish list for a kitchen ceiling fan. However, you will want other features, like a three-speed motor and reversible blade direction — you can reverse the direction of your blades to push warm air down from the ceiling and keep your home warmer in the winter. In a kitchen ceiling fan, this can be a great way to hang onto the heat generated by your wintertime baking and keep it in the house for a little longer.

You’ll also want a light fixture on your kitchen ceiling fan, and LED lights are the way to go. They don’t generate heat, so they won’t cause your kitchen to heat up any more than it already is. LEDs are far more energy-efficient than fluorescent or incandescent bulbs, light up instantly, offer a wide range of lighting colors, and last forever. 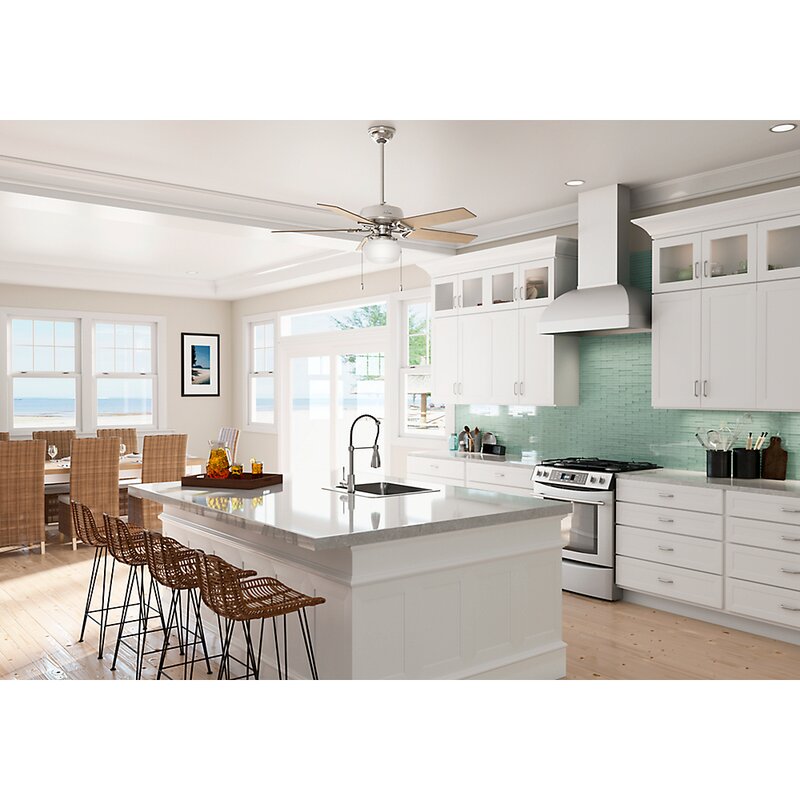 New ceiling fans come with a range of other features, too, like smart connectivity, remote controls, and wall control panels. A budget-friendly fan might skip some of the fancy features, but still offer trusty basics like a quiet motor, multiple fan speeds, and a light fixture. However, like with most things, you can spend a lot more money and get a ceiling fan model with a lot more bells and whistles.

A kitchen without a ceiling fan is a kitchen where cooling breezes are hard to come by — and it’s certainly one you wouldn’t want to bake in on a hot summer’s day. Install a ceiling fan in your kitchen, and get comfortable cooking again. Thanks to Hunter for consulting